It’s 1965 and I’m watching my grandfather and a couple of his pals as they admire a nickel. What I mean is that they’re passing around an apparently ordinary five cent coin. One of them says “now that sure is purty.” Another just gives a low whistle.

I was too young to know about dementia or to suspect that these geezers were simply out of their minds. In fact, they were coin collectors, which was not an unusual thing to be in 1965. They were excited because this nickel was dated 1950 and bore the “D” mint mark, for Denver. Only about two and a half million such nickels had been made, a small number that set off a small frenzy among collectors. By 1965, a single 1950-D nickel in pristine condition could sell for $30, well over $200 in today’s money. 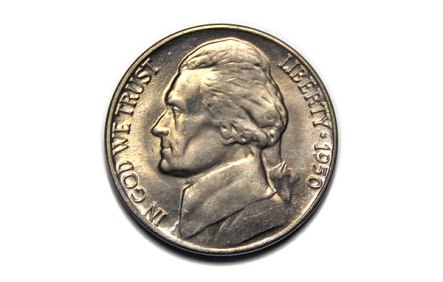 Millions of kids also collected coins in those days, if with less lofty goals. You had a cardboard album with a space in it for, say, every Jefferson nickel ever made (beginning, as everyone knew, with the year 1938). You hunted through your pocket change and over time you filled the spaces as best you could. It was like a horribly slow version of Bingo.

Coin collecting was considered a wholesome and educational hobby for respectable young people, because coins would teach you about History. Even at single-digit ages, kids suspected this notion was idiotic. An album full of nickels, identical except for the dates and mint marks, was not really an information-rich object. We learned nothing about the Louisiana Purchase, or Jefferson’s arguments with the Federalist Party. We did get a vague idea of what Thomas Jefferson looked like, though only from the left side. If Jefferson had been missing his right ear, we would have had to learn that in some other way.

Kids collected stamps too. Here again the history-education logic was foisted on us, I guess because stamp collectors also necessarily spent a lot of time looking at portraits of U.S. Presidents and other famous people. “No one can pursue this hobby without developing a greater knowledge of his national heritage.” A former Postmaster General had said that, without first checking with me or with Bill Boggan, the kid next door who had a huge collection of U.S. stamps. Bill Boggan couldn’t have told you who George Washington sided with in the Revolutionary War, but his stamps were pasted in very neat rows.

Not all of our hobbies were completely emasculated. We had chemistry sets, plus a lofty disdain for the printed instructions that came with them. And how many kids today can build you a radio? We knew how to do it, given a length of wire, an oatmeal box to help form it into a coil, and a galena crystal. It didn’t work very well, but in its way it was a more magical thing than a smart phone.

We even had artillery, mostly in the form of model rockets from a Colorado company called Estes Industries. Your rocket was a cardboard tube with a nose cone and fins made of balsa wood. It was powered by a disposable engine, not much more than another cardboard tube filled with gunpowder. The rocket would shoot up a few hundred feet in a couple of seconds, shhhht!, and when the engine burned through to its top the pressure would blow out the nose cone together with a small parachute. Then if you had a neighbor who was especially scary, crazy, and/or threatening, the rocket would descend directly onto his roof.

Even the rockets, to tell the truth, did not fill our lives with action. There was the moment of flight, and the ten minutes of trespassing and other property crimes that we had to commit to retrieve the rocket afterward. But before all that there were hours and days spent making the rocket – sanding, priming, painting, lacquering, applying decals. And we liked that part. They made a plastic rocket, ready to fly, but we didn’t want it.

Clearly these were hobbies for desperate times, when life was slow, when a Sunday afternoon was a Sahara of idleness and the summers were really endless. There were other things to do of course: homework, chores, television, sports. But these things hadn’t spread out until they met at the margins, filling up all our time. We had to fill it ourselves, with coins and stamps and radios and rockets. If the pretense that these things were “educational” was false, they still taught us patience and attention to detail. In an age without much technology they taught us that boredom was not our equal, that we could conquer it merely by choosing to do something.

Ten or fifteen years ago I noticed that kids in grade school were carrying day planners blocked out with scheduled activities. Before school, after school, weekends. Eleven-year-olds were being shuffled from one appointment to the next like tiny, overworked executives. Apparently someone had redesigned childhood to produce a generation of mindless, contented worker bees, contributing efficiently to society while leading programmed lives. There would be no time in their world for patiently making or collecting anything. I worried about this for a few years.

But some of those kids were my granddaughters, and today as those particular girls verge into adulthood I would not advise you to call them worker bees to their faces. They have busy and interesting lives, and though I’ve tried to think of a way to prove that childhood was better a few decades ago, I doubt I can win that one. I suppose there’s an outside chance that these kids will slow down some day, that some presently unimaginable social trend will open up free time in their schedules. How will they spend it? Coins and stamps will be long forgotten by then. Maybe they’ll decide to launch a rocket. You can still get them. Crazy neighbors, beware.