Like everything else on this Blog the purpose is to help readers make a profit. This is being said quite seriously. Really. There is no collegiate, smart-ass irony at work here. Our task is to help you become a millionaire!

Most self-made millionaires are smart as heck. They know how to cut the corners, cut the deals, cut the competition to pieces. They know how to present themselves and their proposals, how to grease the palm and turn the wheel. They are often very nice people, too. I mean, think about it. If business is about people, then what is the best thing you can do for the people you want to do business with? Make them like you! People like people who like them. The proof of this idea is in the movies. You’ll notice it’s only after they get the millions that a person becomes a curmudgeon or a Scrooge or a worshipper of Mason jars. What does a millionaire care what anyone thinks, right? Check out There Will be Blood for evidence of this theory. In the beginning of the movie the guy is a bit grim and rough, but you like him, yes? You like him right up to the end of the movie when he goes bowling with the preacher-man.

So, that’s what this blog is about. How to get RICH! 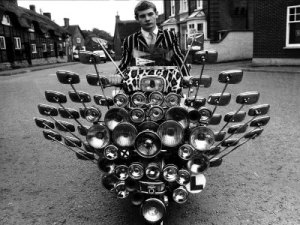 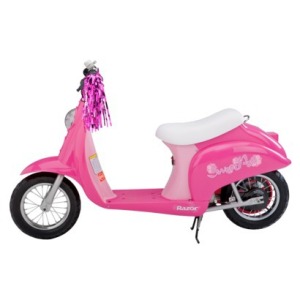 One picture is of a scooter from the mod-years of England, back in the early 60’s. [Editor’s note: I listened to Quadrophenia like you said and I’m still confused.] The other scooter is from an advertisement. I got both pictures from Google, though I’m wondering if it isn’t illegal to copy-and-paste these pictures into a Blog? [Ed: your concern for the legal provenance of stuff on the Internet is touching.] Razor Bikes, I think they’re called, the pink scooter, and I heartily support them! If you like the pink scooter, you can buy it for around $300. It  only goes 15 mph, however, which automatically makes it uncool with my half of my family, all of whom ride Harley-Davidsons and wear Harley-Davidson clothing.

I think the other picture, of the Mod with a million mirrors on his scooter, is way cooler than the pink scooter. I wonder if there is the same weight limit on the Mod scooter? The pink one is for people who weigh up to 175 pounds, which leaves me out.