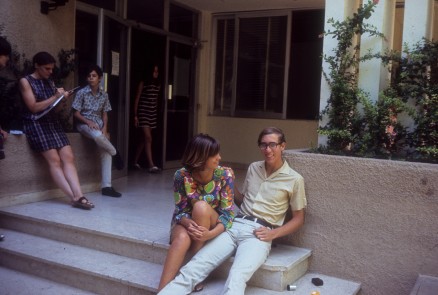 When I was growing up WASP in the Eastern Province of Saudi Arabia, when the good Faisal was king and the oil business was a quiet way to raise children, the kids I envied used to practice getting kicked out of things: their cliques, their parents’ houses, each other’s hearts. In an oil camp of several thousand souls sleeping behind unlocked doors and guarded by a perimeter fence and Saudi police, it was one way of passing the time.

The kids I envied were all smokers. I knew one girl who smoked little Winchester cigars. Smokers were aloof, they were bored, and (this was really exciting to me) they knew they were bored. These kids had experienced on their own things about the human body I was still relying on D.H. Lawrence and Henry Miller to teach me.

They smoked everywhere. In between scuba dives. Under oleander bushes. While bowling at the rec center. Amid the repartee, the languid rolling eye, the hair shaken out of the eyes, would come the rapid tapping of a box of cigarettes on the palm, the removal of the cellophane, the opening of the box, selection, the gentlemanly offering – You? – then the ritual of lighting, as ceremonious and exclusive as knighthood, and finally that incandescent first glow of lit tobacco. I was entranced by the scent of a freshly lit cigarette: a sharp, pungent, promising smell that in a country of desert thorns made me think of falling autumn leaves.

Then the kid would exhale and the luminous perfume would dissipate into the acrid stale stink smokers carry about their clothes, their mouths, the rooms they live in, carry in their bones. The Gatsby boy who a moment before was a Lord Nelson of teenage accomplishments smelled now just like my old man. He was a real chain smoker, something you don’t see very often anymore, a kind of ash-grey exhausted Zeus residing in clouds of Camel cigarette smoke. His cigarettes, maybe because they were burnt so methodically and dispassionately, were only another addiction a man could define himself with. 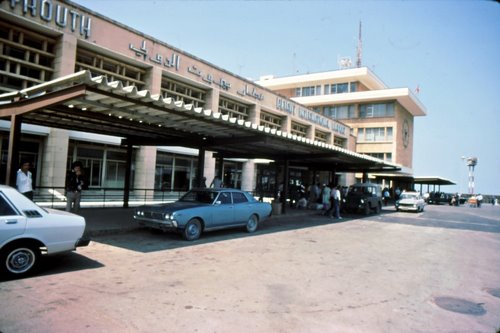 The closest I ever came to getting kicked out of anything or taking up smoking came on a January afternoon at the Beirut International Airport. That morning two dozen or so high school students had been kissed goodbye, told to write and behave, and waved onto a Company Fokker 27 and flown the thousand miles between the Company compound and boarding school in Beirut. We were noisy and talkative arrivals, but we were self-important only in small ways. Against the swagger of royalty or the bluster of millionaires coming to Beirut to gamble or cut deals, a bunch of American teenagers going through Lebanese customs were as drab as pistachio street vendors. We were just American kids, our luggage packed by our mothers, our clothes from JC Penney, our minds half formed by Kahlil Gibran, pop songs, sports, and status symbols like the sandals made from old truck tires and camel hide some of us wore.

The customs officers had more important things to think about. Only five years ago (to the day, in fact) the notorious double agent Kim Philby had slipped away from his Beirut terrace, and on a rainy wharf had boarded a cargo ship for Russia. And in a year (almost to the day) Israeli commandos would raid the Beirut airport and burn fourteen MEA planes to the ground.

In the eighteen months I had been passing through Lebanese customs no one had ever asked me if I had anything to declare. No one had even asked if I was paying attention. Because I was harmless and had never been kicked out of anything, had never betrayed MI6, queen or country, no one had supervised the packing of my suitcase. Most of my clothes and books were crammed into a carry-on. In my suitcase were some blue jeans, a few new shirts, a pair of nice shoes, and thirty nine cartons of American cigarettes.

“Bring me some American cigarettes from that tax-free haven you live in,” my French teacher said before winter break. “They cost a fortune in this damn country.”

I admired my French teacher and I wanted to please. I spent everything I had on cigarettes in the company Commissary. I wasn’t even sure what brand my teacher smoked so I stockpiled Lucky Strikes, Chesterfields, Pall Malls and Marlboros. I liked my French teacher so I refused to buy him Camels. I was sixteen years old.

But as every smuggler will tell you, if you think you know what will happen between the pickup and the drop off, you’re in for a surprise.

We grabbed our bags from the turntables: solid middle-class suitcases from American department stores, a few matched sets for some of the girls. We merged with the lines at Customs. I had thought so little about what I was doing that when I found myself behind a woman in a scarf with half a dozen beat up suitcases, a man in a straw hat in front of her and a Lebanese family of ten behind me – and most of my schoolmates already passing through customs in other lines – it was too late to do anything except wait my turn.

So I waited. It wouldn’t be the first time I was last on a bus. The man in the straw hat, a Lebanese businessman, exchanged phrases in French with the customs officer, who was a young man with a stoical expression. You could tell he took his job very seriously.

He gestured for the businessman to open his suitcase. Everyone was surprised at such an arbitrary request, and at such a busy hour. As if to eliminate any misunderstanding the customs officer repeated the gesture.

A suitcase was turned on its side, unzipped, the loose flap reminding me of a fish being skinned. Shirts, socks, slacks. The businessman preferred Brute cologne. He also had a beautiful set of miniature ivory elephants neatly wrapped in rice paper. From India, a gift for his daughter.

The customs officer indicated that a second suitcase be opened. The woman in front of me turned and gave me a hard glance. This was meant for the customs officer of course, but she could hardly look at him that way. She tried to solicit sympathy from others, but everyone who could was shifting into another lane or preparing an expressionless face.

No one had any sympathy for her when the Lebanese businessman cleared inspection and the customs officer, in English this time, told her to open the first of her bags. The rollers coming to a stop under her bag hypnotized me into disbelief. I was compelled to foot my own suitcase forward.

An air of unreality fell over the scene. I imagined the look on the custom officer’s face when in the fullness of time I unzipped my suitcase to reveal my nice rows of cigarette cartons. I had packed them according to alphabetical order, Chesterfields first, the Pall Malls on the bottom. Would he be incredulous? Triumphant? Or would he think what I was thinking, that none of this could possibly be was real, and just smile me through?

Her face hard as stone, the foster-mother of half a dozen pieces of luggage closed one suitcase and opened another. I saw clothes, lots of clothes. I saw baby shoes and packages of baby formula.

What happens to seized cigarettes? Do they get dispersed among the customs officials?

What happens to smugglers with bad luck?

Before the school year ended one of my schoolmates was kicked out for shoplifting. Then in my senior year a sophomore was busted for possession of hashish (five pounds of it) and sentenced to two years in a Lebanese prison. By the time his family persuaded the Company to secure his release the sophomore had turned into a broken little old man. Another boy arrested for drugs hanged himself in a Corniche hotel room while waiting for deportation. There were others boys like them, too many, strung out over the years.

Bag number six was opened, inspected, closed, its owner given a nod of approval. Welcome to Lebanon.

Two things then happened almost at once. A familiar blonde pony-tail darted through the customs gate – “Hurry up!” – followed by a familiar laugh; and as I put one hand on my suitcase handle and the other on its bottom, to lift the suitcase onto the rollers, the customs official looked past me and for five very long seconds looked into the crowds. There was nothing particular about his look, nothing in his expression to indicate his feelings. Without looking at me, he waved his left hand. “C’est bien.”

I cannot tell you how I emerged from the airport terminal or how my suitcase got stowed in the bus cargo hold or how I found myself with a window seat.

That air of unreality.

Nor can I say what my French teacher said when he took possession of the thirty nine cartons. I’m sure he was appreciative, for he was a good man and kind.